During my ‘on-line’ life I have established a vast number of friends and colleagues, one of which is Adam Wong.

Adam Wong is a typical example of how anyone, regardless or age and experience can realize their dreams if they simply just use the right strategies and take massive action.

In his early years, he invested in himself and attended several ‘Wealth’ programs.

But Adam didn’t do what 99% of individuals do when they finish learning about a topic. He did what only 1% of the population do…he took took massive action and applied everything he’d been taught.

He did not hesitate at all. He decided that he did not want to get stuck in a normal 9am-5pm job like everyone else and eventually decided that he would become an entrepreneur as an Internet Marketer.

When he applied himself wholeheartedly, the results he got were truly inspiring. Within two weeks of launching his business, he generated US$10,011 worth of sales. Within a year and a half, he hit a record US$21,154 a month in December. He continued to build his online business until today, it generates a six figure income while he just works four hours a day from his home. 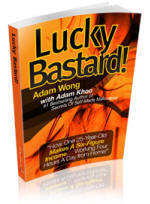 All his friends call him a LUCKY BASTARD to have such a great life with a great income. So, he decided to write a book (which honestly is a VERY GOOD READ) to teach people exactly how he did it and how anyone can achieve the same success he has on the Internet.

A few months a go, Adam gave me a ‘draft’ copy of his book to read. I couldn’t put it down. I know Internet Marketers who charge $2,000 a month to tell you the same stuff as what Adam has included in his book, Lucky Bastard!

And right now, Adam is giving you the chance to download the first chapter right here:

Although I will say that Adam is a LUCKY BASTARD (he won’t mind me saying that!), he is also a very clever one.

Read more about my thoughts on Adam’s new book:

If WordPress Is Good Enough For Jeff Johnson Then It Must Be Good
Website Name: How To Choose The Best One

8 Responses to The Lucky Bastard!