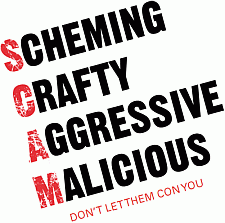 Some of you know I manage an article directory type website called www.GreatManagement.org.

It is a website that holds hundreds of articles covering the subjects of Management and self-development from a number of different authors including myself.

When I first set-up the site, my mentor at the time suggest I ‘go live’ with at least 200 articles. This was to give a good first impression to visitors.

My mentor could supply them for me (for a fee).

He did and I published them all with a link back to the original source.

That was back at the beginning of March 2008.

Last week I receive this email from one of the article authors:

Subject: Invoice for our article used

Due to your use of our material without permission and/or without proper credit boxes, you MUST contact us to confirm payment arrangements by June 25, 2010 end of business, to avoid legal action, DMCA action, and notification of over one million visitors to our sites each year, that you are a copyright violator.

I didn’t see the email, at first.

Here’s the message I posted to a fellow who appears to have stolen some of my articles and used them without permission. Apparently he’s not responding to me, so here’s how we handle things, at least to start:

I have not received ANY response from you regarding your theft of my articles and violation of my copyrights, so we start fighting back, enlisting the help of others who belief theft of intellectual property is wrong in the social media world. The first step will be the blogging, facebooking and tweeting about you until a) you rectify the situation b) pay the money you now owe me as a result of the use of my articles, and c) apologize publicly.

In addition, I’ll be contacting all of the authors of material you use to inform them and advise them of their options. Then there will be take down requests to your webhosts, and a few other things, including submitting the bill for $650 to a collection agency.

I make my living by writing. You try to take money out of my family’s mouth, I take it personally.

I hadn’t responded within a day, so he goes public!

Not a lot I can do about that. That’s the freedom of the Internet.

Thing is I recognized the author’s name and I was sure I had agreed with him that I could use his articles as long as I link-backed to his site. I had no evidence of this – it was just my memory.

First thing I did was delete the articles. He asked for “a) you rectify the situation” – I did by deleting the articles.

I replied on Facebook – explaining what I thought we had agreed and ending with “Apologies if I am mistaken.…” (covering point “c) apologize publicly.”).

He was having none of it. There was no agreement, nothing – as far as he was concerned.

This is what he said:

Andrew, You are lying. I can say that because in 17 years, except for a handful of articles we NEVER allow anyone to republish our articles on the Internet in public places. EVER EVER. As indicated you owe me $650 for past illegal use. Your outright lies in public prompted me to look at who else you are stealing from. You, Sir, have a serious serious business and legal problem.

As for waiting to give you a chance to respond. Funny, that. You accepted my friend request 24 hours before you responded, so that doesn’t fly.

(He doesn’t know I outsource the acceptance of Facebook friend requests).
So, what’s it going to be? I’ll check back later today for an answer, and it better be the correct one that includes an apology, a commitment to pay me what you owe.

As for none of my articles on your site, not anymore. You took them down for which I thank you. I DO have screenshots as proof.

In the next few days, I’ll be profiling you in depth and explaining how you “generate” content for your blog, and a few other nuggets. It will appear on my blog and I’ll start linking to it and letting people know every day until I get paid.

FWI, I get several million targeted visitors each year. And, now that you’ve outright lied, I’m not settling for anything less than what is owed. It’s up to you. I have better things to do than this, and I’m sure you do too, but NOW, I’m really angry.

I was wrong – my memory was wrong. I thought I had an agreement in place but had no evidence.

Powerful tip: If you have any agreements in place with others – keep a record of what was agreed.

Then I remembered about my mentor at the time providing the articles I could legally use.

Luckily I did keep all those emails and there was the authors articles – listed in the articles my mentor said I could legally use on my site – which, of course, I did with a link-back.

I explain the situation to the author. This is what I said:

I have completed some more research on the history of this situation.

I was shocked and concerned to find out that some of the content which I posted on my site, belonged to you. As a small business owner, I understand the importance of intellectual property, and how you must have felt when you discovered your work had been plagiarised on my site.

When I first launched my article directory site, I purchased article sourcing services from a freelancer (by the name of xxxx). Xxxx sent me 200 articles which at the time he assured me were legally useable. I subsequently used the materials which he had provided for me, in good faith that I was not infringing copyright or abusing someone’s intellectual property.

Had I known that my earlier outsourcing decision would have resulted in this unfortunate event occurring, I would obviously never have published the work.

I hope you will take xxxx to task over this matter, as I intend to do, as it is evident that he is selling your words under false pretences.

Please let me know what steps I may now take to resolve the issue, and I will do all I can to address the problems which I unwittingly caused through my outsourcing decision.

If you would like to contact xxxx, I’d be delighted. I’ve forwarded on the e-mails which demonstrate that I was purchasing the articles in good faith, and had absolutely no way of knowing that I was contravening copyright or reproducing your work deliberately.

With best wishes, and apologies for the misunderstanding,

I sent the author a copy of the original email from my mentor (at the time), listing the articles I could use.

Thanks for the response. I tend to be reasonable about such things unless I feel I’m being lied to.

There is a bottom line in this case and that is that you are responsible for the content on your site, as we all our, at least morally, and perhaps legally too, although that depends. If you were deceived by someone, than that is an issue between you and the other person, and I should bear the consequences of your mistake.

I’m sure you understand that republishing of articles reduces the value of the originals in a number of ways — search engine placement, and sales, both, since I charge for the use of most of my articles to customers.

So, I feel compelled to stick to the amount in the invoice and ask you to make arrangements with me for payment via credit card or some other method ASAP. The correct amount should be $750, but I gave you the figure $650 by error, so I’ll stand by the latter figure. If you do that, I’ll be glad to post publicly that we have come to an agreement on the issue.

Here’s the thing. I suspect that in fact almost all of the articles on that site are stolen. At the least, you did something unacceptable and that is it appears that you removed the copyright notices from the articles. It kind of stretches credibility that you have permission to reprint articles from Dave Thomas, Trump, and a number of other celebs, and I suspect the other 100 or 200 article authors have also been victimized.

That does not put you in a good light. I’m not sure what I care to do about this larger issue. You may know that I AM a writer, and that I do take copyright stuff seriously.

If I took articles from my mentor and he said I could use them, I did.

This may be very naive on my part but when you ask a mentor to supply articles I can legally use and they supply them…you use them.

I wasn’t going to check every single one – all 200 of them to see if I could. That is what I was paying him for.

Today, the author has blogged about the whole episode. He mentions me by name, my site and the fact that I lied about having permission. This is the bit about me thinking I had a prior arrangement with him

He doesn’t mention about me outsourcing the supply of legal articles to use.

Do I fight back, do I ignore or simply continue to defend my case?

I know I have done nothing wrong. I had an agreement with my mentor to supply legal articles to use. The articles gave credit to the authors.

The only thing I am guilty of:

Being naive and believing what the mentor had provided was ok to use.

Of course, I am now concerned are there any other articles that fall into the ‘illegal’ category that were supplied by the mentor. For that reason, I have turned off the site so I can check with the mentor.

The author has now called me liar, a cheat and a thief – in public – well around the web!

Now I’m thinking is this guy a scammer?

No, he can’t be but he seems to be going over the top and that’s what scammers do.

I suppose if someone out there on the www has got it in for you – there’s not a lot you can do, is there?

Did you also notice I have yet to mention the author’s name!

Blogging Guide: More FeedBack On Our Free Guide
The Bloggers Holiday: How To Manage Your Blog While You Are On Vacation

58 Responses to Am I being Scammed Again?