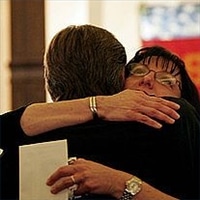 Before becoming a full-time blogger, I worked for large corporate companies for 30 years.

There is no easy way to tell someone they are redundant but there are better ways than others.

I remember once being gathered together by the IT Director and he said to all of us, “We are going to have to cut some staff. Next week we will tell you who stays and who goes.”

The day arrived when we were going to be told whether or not we survived.

The Human Resources Manager entered into the open plan office and called one person into her office.

We didn’t know whether the person called was being made redundant or was a ‘survivor’.

They returned. They were redundant. They packed their belongings and went home to tell their families.

The Human Resources Manager returned again into the open plan office and called one another person into her office.

They were redundant, as well.

There was a pattern emerging.

If your name is called out, you are being made redundant.

The Human Resources Manager returned again into the open planned office. She looked at me and said, “Andrew”.

I swallowed hard. My stomach went into my mouth.

“Do you know where Alan is?” she carried on.

She called someone else’s name out.

No work got done.

Eventually the IT Director appeared and said, “All those who have been made redundant, have now been told. The rest of you all have jobs”

I rang my wife. We were happy.

I experienced this situation about 6 or 7 times in my career and it’s a horrible feeling.

But what about those who were not so lucky?

They were angry, concerned, worried, bitter, and fearful.

Can you imagine it?

You are working at a company, busy and doing a great job. You have been there several years, know numerous individuals, know how the company works and have many friends.

Than one day, you are no longer wanted!

No wonder the individuals are bitter and angry.

I am still in contact with some of those individuals who were made redundant and every single one of them is now working, which is just brilliant news.

They were confident in their abilities and they stayed positive during those worrying times.

Some had setbacks, no doubt. Not getting the first job they applied for. Many had not updated their resumes for years. Where do you start?

Some still work for other large companies. Some started their own businesses. Some retired.

Many had invested in themselves.

They kept learning and discovering.

That is what winners do.

Investing in yourself gives you confidence in your abilities. It might be a $20 personal development book, it might be an audio on success, or it might a public speaking course.

In fact one friend who was made redundant said to me recently “I would not go back for all the money in the world and would absolutely say it was the best thing that could have happened to me”.

The newspaper headlines stated “1 in 4 employees would be in financial dire straits if they lost their job”.

Those situations got me thinking. If I were in that position, what would I do?

I needed my own plan ‘b’ for when the company said bye-bye to Andrew Rondeau.

That’s when I started my own on-line business. While still working full-time, I would work evenings and weekends. It built up and after 2 years I decided to leave the corporate world and am now my own boss!

So what emotional state would you be in if you lost your job?

What would be your financial situation?

How much do you invest in yourself?

Are you investing enough?

What is your plan B?

It’s a competitive world out there!

You could try your hand at blogging with  my
free Income Blogging Guide Blueprint.

Have you experienced a lay off or know someone who has? Share your views in the comments below.

corporate, lost, tell, to be

The Famous Bloggers Contest
What would you do if you were laid off?

34 Responses to What is your plan B?