You are here: Home › How To Make A Blog and a Blog Income › affiliate marketing strategy › What I Learned From Sam The Dog
0 Flares Twitter 0 Facebook 0 Google+ 0 LinkedIn 0 Email -- Buffer 0 0 Flares × 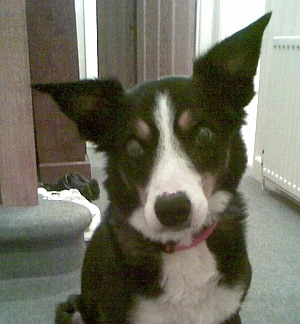 In memory of Sam Rondeau

I’d like to take you back 4 years when our Border Collie dog Sam was still with us.

Sam was a very intelligent, smart and active dog. He was a real live wire!

Here is Sam’s last year in his words.

What can you learn?

Playing with my ball. I just love it – fetching, catching, dropping – I just don’t know when to stop. Oh and sometimes I can’t move the next day due to my aching muscles.

I love learning new tricks – I can tell the difference between different coloured balls, I can play dead, I can go to the toilet when I hear a particular command. I must know the meaning of at least 50 commands.

And I love people. I love people more than I do other dogs. When we go to the park I’m not interested in the other dogs – I like cuddles from the dog owners. It makes their dogs jealous!

Just over a year ago, I began to feel rather unwell and subdued. I was also drinking loads and a few nights I wet my bed!

So my owners did the normal thing and took me to the vets.

I was poked and prodded but I didn’t mind, I just laid there. In fact, it was quite nice really, I smelt lots of new smells!

My parents faces looked really worried so I thought it must be serious. I was diagnosed as being diabetic. Didn’t know what that meant so trotted off home.

That night I didn’t get my bedtime treat of a few biscuits. I thought that was a bit strange.

Next morning, I had some new strange food – it was nice, though, so I ate it all up. Then my dad stuck a needle in me and I felt this really cold liquid inside me.

What were they doing to me – I thought I’d be a good boy and get a treat! I didn’t although I did get a big cuddle – that was nice.

I Got Used To New Habits

This started to become a habit – strange food twice a day quickly followed by a needle in the neck, a cold feeling inside followed by a cuddle.

And I missed all the treats in-between meals.

After a couple of months, I noticed my eyes were not as good as they were. I could only see things when they were really close. Often my dad would throw the ball for me to catch and I would miss it – it would hit me on the nose.

I used to be the best catcher in my town!

I Could Not See

Then I woke up one day and it was just black – I couldn’t see a thing. That was scary. I just bumped into things, so I was off to a new vet. A special eye vet. It was miles and miles away – a long car journey.

We went to this new vet many times, I just got in the car and fell asleep – it was nice.

One time I was there, I had a really deep sleep, woke up and could see! I saw my mum and dad again. I could catch the ball, I could see what I was eating – not that it had changed in any way but it was nice to see if I had eaten it all.

So not only did I have needles poked in me twice a day, I had drops put in my eyes 6 times a day. But look, I could see and play and everything!

One thing I did notice though was that I was always hungry. I would look for food around the house – check the bins, look in the bedrooms, just for any crumbs of food.

What A Mistake I Made!

One day I found a tennis ball. Now I love tennis balls – I was hungry, so I ate it. That made me really, really ill. Back to the vets we went. They didn’t know I had eaten a tennis ball, they just knew I was not very well. They couldn’t find anything wrong – so they shaved off all my hair on my belly and chest and some of my sides. 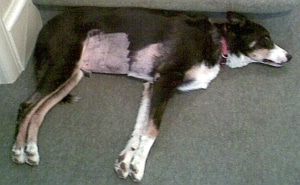 my favorite lying position - at the bottom of the stairs

They then put this really cold thing on me that looked inside me and they kept me in the vets overnight. That was lonely.

Eventually the tennis ball passed through me and I was then fine.

Then you never guess what happened next. My left eye began to really hurt and back to the eye vets we went. It was really painful, that left eye, but I didn’t know how to tell them.

Luckily, they took it out, but I can still see with my right eye. 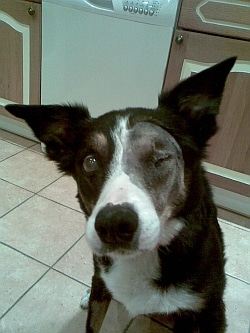 here I am with one eye!

But It Is Not That Bad…

So I have had a rather eventful year but that’s life isn’t it. You just deal with these things and get on with it. I’m still loved, get loads of cuddles, fed, played with, lots of sleep. It’s great!

This is what I have heard my owners say about me:

Sam has had to deal with a lot of change in the last year.

He has never moaned, never complained, never refused, never run away from the injections. All the vets comment they have never seen a dog so happy no matter how unwell he is!

When Sam was with us, if you gave him his ball, he was still a puppy at heart.

We learned so much from him – over and above staying calm in a crisis – accept change: it happens to you; sometimes you can’t do much about it – but just carry on, life is all about having fun and that is exactly what Sam did no matter what he had to go through.

What can you learn from Sam the Border Collie?

44 Responses to What I Learned From Sam The Dog