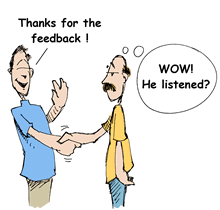 A little while back I changed my Twitter background and I received some pretty cool and positive responses – thank you.

As a result of the positive responses, I thought it would make sense to change my header banner to resemble the new Twitter background.

Within a day of deciding to make the changes, the changes were made but I never got around to changing the banner. I wasn’t too sure whether it was the right thing to do…but why?

I had nothing to lose…possibly some people would hate it and what is wrong with that?

Then over the weekend, I received an email from another blogger…Chris Guthrie, owner of www.MakeMoneyontheInternet.com.

He said he liked my blog and my writing/advice but wanted to offer some advice as well…which was change your header banner.

He went on to say, ”I hope I don’t sound like a jerk sending you an email like this…” and “I really hope you take this email with the best of intentions…”

One…he is not a jerk (and he didn’t sound like one) and two…he spurred me on to make the changes and add my new header banner.

So thank you Chris.

Now I know I didn’t ask Chris for his opinion – it was a spontaneous email on his behalf but it was nicely written and his constructive criticism was spot on.

I wrote back and gave him some feedback regarding his blog (By the way, he did ask me to).

What’s the knock on effect?

Chris ‘made me’ take some action and put my new header banner live.

I’ve provided Chris with some feedback on his site, which he may, or may not take action on…remember it is only my opinion.

Feedback – when did you last ask for it?

Ask for it…go one…you have nothing to lose.

What do you think of my new header banner?

The new and the ex one now rotate.

Do you like the old one or the new one or neither?

25 Responses to Feedback – When did you last ask for it?