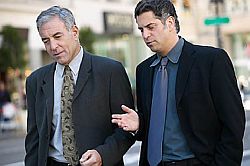 Have you ever worked in an office environment, with a team?

Ask anyone who goes in to work five days a week what the best part of their job is, and the majority of people will say that it’s the colleagues they work with.

Most of us have challenging roles, and nothing peps a harried worker up more than sharing their trials, tribulations and successes with those around them who are in the same situation.

Having a peer group at work brings all sorts of benefits.

It helps people to reduce stress by sharing anxieties or divvying up the workload. It lets people sound off to others who understand them and their situation, and it provides much-needed support when things are tough.

Better still, most work colleagues will share your personal successes too, celebrating marriage or the birth of a new baby, or your birthday with enthusiasm.

Even if most of us would not choose to socialise with our colleagues outside of work, or you can’t imagine sitting down for a coffee with most of them fifty years from now, they are still a lovely part of working in an office environment.

So, when people decide to run their own on-line business, one of the key benefits they lose from the office set-up is this camaraderie and shared vision.

They miss out on being able to go in to work each morning, picking coffees up on the way, and chewing the proverbial fat with people who share their work-related interests. This loss of social networking can hit many people quite hard, as they realise that they won’t get the support and friendship which comes through working in a corporate role.

When I first made the transition from an office based job to working for myself, the thing which hit me hardest was the potential loneliness of my new career.

I’d go in to my office (a bedroom at home) each morning and feel a bit isolated, and there was only so much I could share with my wife about work before she got a bit bored with me talking to her about it all. I felt initially as if I would never be able to replace that great feeling of working with a group of people each day that I genuinely liked, managing a team and sharing my work highs and lows with people who felt the same way.

However, after a few weeks of online networking, something magical happened. The advent of Skype meant that I could have conversations with like-minded people about my new projects, or support customers with video conferencing or telephone calls each day.

My e-mail inbox started to flood with conversations, and my Skype messaging box was forever lighting up with new conversations. People contacted me from all over the world with advice, or asking for help, or simply greeting me as I sat down to work each morning.

This proved to me that, far from being a lonely business, working from home can be as full of interaction as heading in to the office each day and being surrounded by a team of people. OK, so the interaction is virtual, but it’s no less valued or fulfilling for that. I’ve learned that there are even points when I need to ‘hide’ from my network of home workers in order to get things done, as the temptation to Skype all day instead of actually applying myself is very high most of the time!

My network of peers, friends, customers and colleagues grows every day, and along with that comes a real sense of belonging right here, in the blogosphere. I have learned that I never need to be alone as long as I have this shared connection with other people who have a similar interest.

Never be afraid of making the jump in to an on-line business for a living, because of potential isolation. If anything, the main thing to learn is that it’s OK to switch your Skype off from time to time, to focus on earning a living!

Have you escaped the nine-to-five and experienced similar?