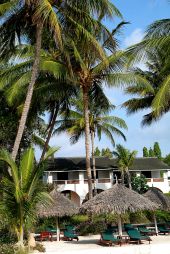 Our hotel awaits us!

To successfully get through the Kenyan customers, we had to complete 5 different forms.

Each one of them asking for similar information including passport number and place of stay while in Kenya.

But it didn’t actually take that long to get through the customers. It was pretty efficient and within an hour we were on the coach with our suitcases.

But I must tell you about getting our suitcases on the coach.

Ten meters before the coach, a holiday rep took our cases, handed them to the driver and said, “Give me tip”.

I gave him a tip.

“And for my friend” he said referring to the driver who took the cases from him.

We sat on the coach and watched the reps.

Without fail, ten meters from the coach, they take over your suitcases, put them on the coach and put out their hands for a tip.

They must have made a fortune.

The trip to the actual hotel was 90 minutes but it went so fast.

We enjoyed the hustle and bustle of Mombassa town.

Watching the people, watching the traffic. It was great even if it was 8am and we’d been travelling for 15 hours or so!

3 Responses to Arriving in Kenya